Length isn’t everything at Tsawwassen Springs

New course – totalling 5,400 yards but still a par 70 – features plenty of  water, and places a premium on shotmaking

Hybrid golf clubs have become extremely popular in recent years and golf  architect Ted Locke likes to think there’s a market for what he calls a hybrid  course.

That’s how Locke describes Tsawwassen Springs, a new course he designed on  the site of the former Tsawwassen Golf Club.

Tsawwassen Springs, which is scheduled to open this July, is not an executive layout, but it’s not what you would call a full-length championship course either.

“I’d have to say it’s pretty unique because it’s a shorter-yardage layout,”  says the Vancouver-based Locke, whose local work includes Redwoods in Langley  and North Belling-ham in Washington state.

“There’s a lot of open space and there are some areas with trees, so when you  move from one area of the course to another, it’s changed. I think it adds to a  more adventurous linkage of 18 holes. It’s interesting that way. There’s a  little bit of length, a little bit of traditional, a little bit of target  golf.”

In an era when the majority of newer courses are measuring as much as 7,500  yards or even longer, Locke thinks Tsawwassen Springs might just be a welcome  change for many golfers.

“I think it will appeal to everybody,” he says. “The better player has to  take a more benevolent approach to it, where if they try to blast one out and  hit big tee shots it’s not going to fit well. I’d like to see the better players  just hit hybrids off the tees, on the par 4s and 5s, and then have some good  shots into the greens.

“For the kids we’ve got some really short tees where they can play it for the  appropriate length for the type of tee shots they are going to hit and for  seniors it’s an easy walking course and lends itself to their kind of touch and  feel around the greens.”

“Ron really wanted to have a dramatic finish, so there’s a semi-island green,  kind of a peninsula green, so that might be one that people will talk about  more,” he says.

What Locke calls “a serpentine channel” winds its way through much of the  course and there are 10 other ponds located on the property.

Toigo’s Shato Holdings Ltd. is the majority owner of Tsawwassen Springs, but  the likes of former Canucks player and coach Pat Quinn, singer Michael Bublé and  entertainment agent Bruce Allen also have stakes in the development.

Tsawwassen Springs is more than just a golf course.

It’s a residential community that one day will include nearly 300 condos and  200 houses spread over the 55-hectare site.

“You can drive your golf cart right into your garage,” says head professional  Murray Poje.

A 35,000-square-foot club-house is planned that will include a sports bar  overlooking the 18th green.

Eleven holes were seeded last fall and the remainder of the course will be  seeded this spring.

“We have all the greens done, just the fairways and tees to do on seven  holes,” Locke says.

“We should be open some-time in July.”

Par for this course: Residential golf development bucks trend and expands
To keep golfers and non-golfers equally happy you need to think twice as hard 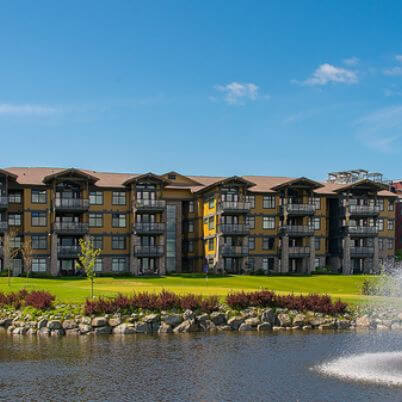